As you may know, Kenny and I recently took a mini vacation to celebrate our one year wedding anniversary. We took a road trip (it’s about three and a half hours away) to a town in northern Michigan, Traverse City. We left early Sunday morning, and we were back later in the afternoon on Tuesday.  It was the first time we had left Kennedy overnight. She stayed with my parents, and honestly, leaving her wasn’t as bad as I had anticipated it to be. We were able to FaceTime her for a little while each day, so that made things a bit easier.

We arrived in the town around 11:00 am, and check-in time at the hotel wasn’t until 3pm. So, we decided to head down town and do some exploring. After visiting a few of the local shops we decided to grab some lunch. The Franklin quickly caught our eye. There were open seats at the bar, which was perfect because this momma was ready for her first Bloody Mary of the trip!! We also ordered a few appetizers. I got this amazing flat bread, and Kenny got a charcuterie plate. Upon receiving our food Kenny says, and I quote, “This is the fanciest damn sausage I’ve ever seen.”

After we did a little more exploring, we headed back to the hotel to unpack our belongings, where we were treated to a pretty great view.

We headed out again to go back downtown, where we found a couple of cool art pieces.

Everyone was getting their picture taken at this wall filled with hearts! We thought it fit the occasion perfectly, and had to get in on the fun!!

That night we went to the Jolly Pumpkin, a brewery just outside of town, for dinner. This had been recommended to us by a few friends. We were told they had the best truffle fries! Unfortunately, Kenny and I, were both left a little disappointed. While the drinks were good, both of the appetizers we ordered, including the truffle fries, were just okay. We ended up not ordering any actual food, and leaving shortly after our drinks were finished.

What did not disappoint, was the amazing sunset we saw!

This was my FAVORITE part of the trip. I am not easily taken back, especially by nature. Trees, mountains, hills… Not really my bag. But I have never seen anything like this sunset before. It literally took my breath away! The pictures we took could never do it justice. For a while, we stood hand-in-hand, in silence, and mesmerized by what we saw.

After we were done gazing at the sunset and taking a ton of pictures, we turned the jeep around and drove back up to the light house on Mission Pointe. 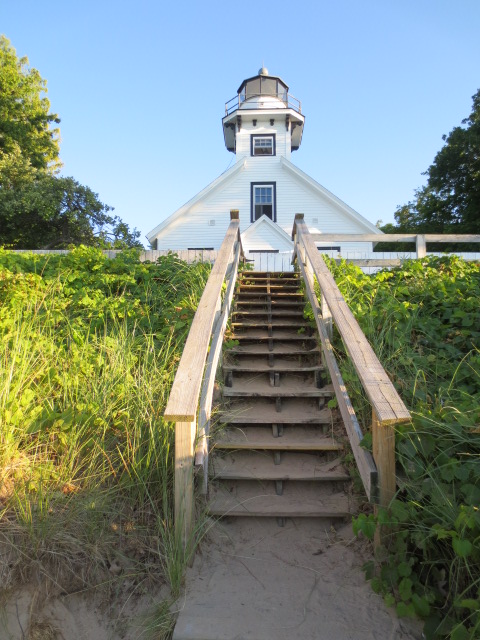 When we left the light house, we took the party back to the hotel, where we partied the night away watching the Olympics and drinking an ENTIRE bottle of wine!

The following day, we took our travels to Sutton’s Bay and Leeland. Before we reached these towns, Kenny had to stop at a Beef Jerky shop. VERRRYYY sketchy little place, but he was told that it had the best jerky in the state, so we HAD to go! My man loves his meats! We forgot our bathing suits at home… So we were unable to enjoy the beautiful beaches we had found in these two precious towns. We did find a local ice cream shop that served hand scooped ice cream. Yum! I usually don’t get my ice cream in cones, especially on such hot days. But I was feeling adventurous, and my God was it worth it! 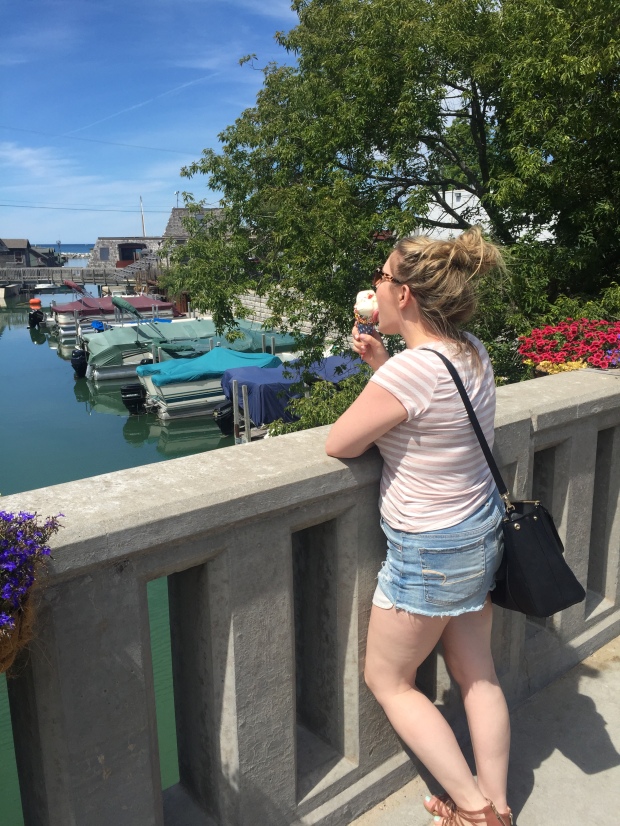 Driving back to the hotel, we stumbled upon a field of sunflowers; my second favorite part of the trip. I’ve also never seen a field of sunflowers before. I’m not actually sure how? They were beautiful to say the least. You know how they say scents activate memories? Like when you smell the perfume you wore on your wedding day, it will bring back the memories of that day? I think seeing sunflowers will be the same for this trip. Like, every time I see a sunflower I will remember our one year anniversary trip to Traverse City. 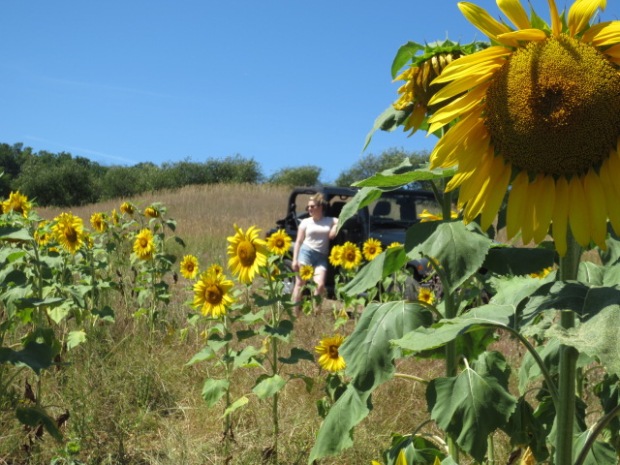 That night, we decided to make the most of our last day and visit not only one, but two restaurants. Well the first was a winery, Bonobo. We did a wine tasting there. They had a few ciders to try as well, and I actually found a beer that I liked! They have an amazing pear cider. To me, it tasted almost like wine with just a little more carbonation. I am not a wine, nor a beer connoisseur , so take what I am saying with a grain of salt. Bonobo has small plates that were created by Mario Batali. He is on the Chew! (Kenny and I are total amateur foodies). We just had to try a dish. Of course, we picked the messiest dish to try and eat. (while we were trying to pretend like we were sophisticated adults for an hour) We ordered the Poached shrimp, which is fresh shrimp in organic olive oil, pickling spice, fennel, red pepper, and served with a French baguette. It was seriously SO FRICKEN good, but of course two bites in who spills the oil all over herself.. This girl right here. After having a little melt down, I remembered that I had my trusty Tide to go pen in my purse. Fixed that oil stain right up! 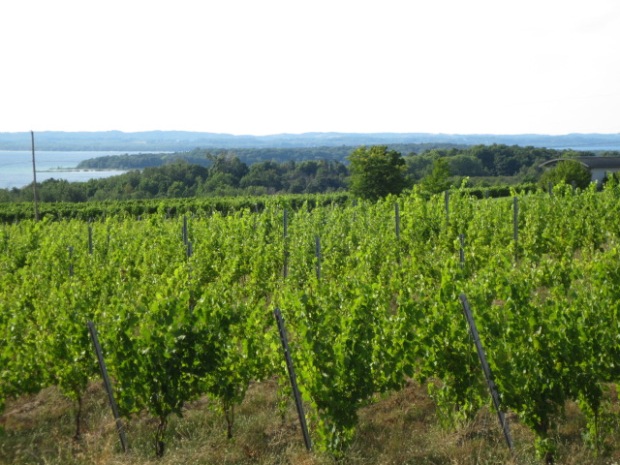 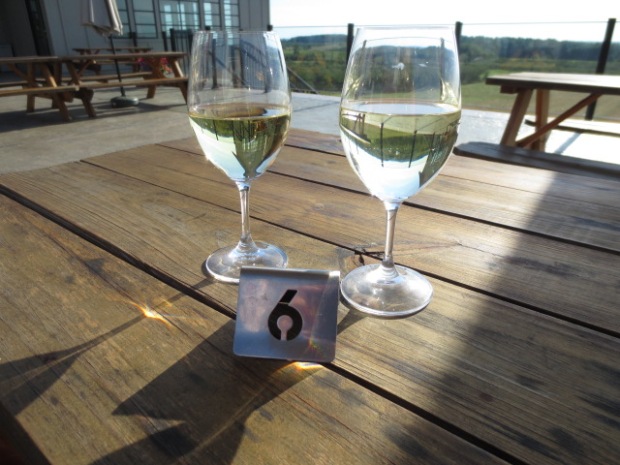 And we were off! Next up was the Amical, a restaurant down-town Traverse City. It wasn’t super fancy, but they had amazing food! Kenny got some kind of delicious Asian-fusion steak dish, that was a dinner special that night. I ordered the best lasagna I have EVER had in my life. It was a mushroom-leek lasagna, with roasted mushrooms, mascarpone and ricotta, baby spinach, and a balsamic reduction. The balsamic reduction was EVERYTHING! 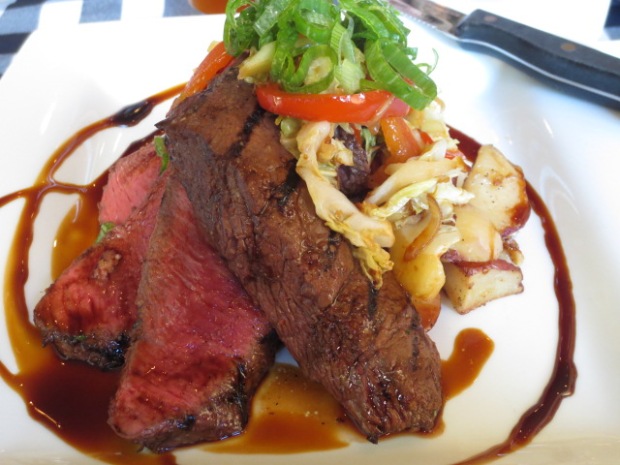 We ended the night by going back  to the hotel room and eating the same cake that we had on our wedding, and popping a little bubbly.

We had such a good time on our mini get-away. It was so nice to get out of town for a little while. It was even better to get to spend a little one-on-one time with my hubby. We try to have at least one date night a month usually, but sometimes, life just gets the best of us. This trip allowed us to reconnect again, as two young kids in love. We did miss Kennedy though! Especially the last hour during the car ride home we were both pretty ready to see our little nugget, and hug and kiss on her!

Thanks for reading guys,